LightsOut is an electronic single player game manufactured by Tiger Toys in 1995. In the original version, 25 lights are arranged in a 5 by 5 lattice. Each of these lights can either be on or off and its state can be inverted with a button related to that light. Additionally, all four horizontally and vertically adjacent lights - forming a cross - get inverted as well when a single light gets pressed. The goal is to turn all lights out, starting with a random pattern of lights, although we will see that not every pattern has a solution. 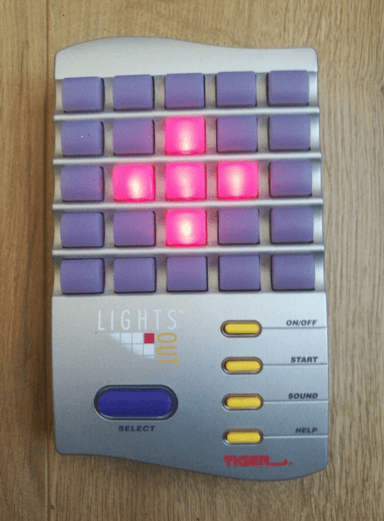 A related problem consists of finding a solution when all lights are initially turned on, which is known as the "all-ones problem" and is possible for any square lattice, as shown by Sutner (1989). In this article the optimal solution in terms of the number of moves for LightsOut is derived using linear algebra and a demo is implemented in JavaScript.

Play with Lights Out Solver

A given light configuration can be represented as a matrix \(\mathcal{C}\in\mathbb{Z}^{n\times m}_2\), a matrix of integers modulo 2 where a \(1\) represents a light turned on and \(0\) a light turned off. This makes sense, as any even number of presses of the same button will always restore the previous state, from which follows that we need to push every button no more than once. As an example, for a smaller \(3\times 3\) lattice the configuration will look as follows:

Every new state \(\mathcal{C}'\) depends only on the buttons pressed, no matter in what order. This means that if we start with an empty lattice and turn on lights at random, all we have to do is push the same buttons again to return to an empty lattice. This coincides with the commutative property of matrix addition. Mathematically, a winning combination can then be expressed as

More problematic is the standard Lights Out lattice with a matrix \(\mathcal{A}\) of size \(25\times 25\), where we have a rank of 23 and thus two freely parameterizable variables, resulting in four possible optimal solutions. In either case, we first use Gauss-Jordan elimination on the field \(\mathbb{Z}_2\) to calculate the rank of the matrix, analyze \(\text{col}(\mathcal{A})\) to determine if a solution exists at all and come up with the row echelon form \(E=R\mathcal{A}\) of the matrix, with \(R\) being the product of all Gauss-Jordan row operations on \(\mathcal{A}\).