At CodinGame we like to reinvent things. XML, JSON etc. that’s great, but for a better web, we’ve invented our own text data format (called CGX) to represent structured information.

Here is an example of data structured with CGX: 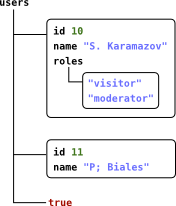 Graphical representation of the example.

ELEMENT
An ELEMENT can be of any of the following types BLOCK, PRIMITIVE_TYPE or KEY_VALUE.

PRIMITIVE_TYPE
A number, a Boolean, null, or a string of characters (surrounded by the marker ') 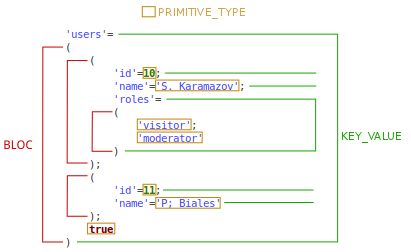 Your mission: write a program that formats CGX content to make it readable!

Beyond the rules below, the displayed result should not contain any space, tab, or carriage return. No other rule should be added.​

INPUT:
Line 1: The number N of CGX lines to be formatted
The N following lines: The CGX content. Each line contains maximum 1000 characters. All the characters are ASCII.

CONSTRAINTS :
The CGX content supplied will always be valid.
The strings of characters do not include the character '
0 < N < 10000

Even if regular expressions are given as a hint, it doesn't make sense to parse a nested structure with regular expressions (since an infinite recursion can't be modeled with a finate state machine, from which follows it's not a type 3 grammer and as such no regular expression can be found). A better approach is tokenizing all valid symbols of CGX and write it to stdout with a clean formatting. This can be separated into two steps, the tokenizing and formatting step, or we write out the data as we get it in. Let's analyze the grammer for this problem. If we get a quote, we need to continue searching until we get the closing quote. Every character in between can be pushed out directly. If we see any whitespace, we simply ignore it. If we get a semicolon, we print it, followed by a new line. If we get an opening bracket, we write a new line character, if we haven't previously printed one. After that, the current indent and the bracket can follow. Almost the same applies for a closing bracket, but in reverse.

As we want to re-format the string only, no context knowledge is needed. Any other token can be printed as is, which results in the following C++ implementation: