Your objective is to write a program capable of predicting the route Indy will take on his way down a tunnel. Indy is not in danger of getting trapped in this first mission.

The tunnel consists of a patchwork of square rooms of different types.The rooms can be accessed and activated by computer using an ancient RS232 serial port (because Mayans aren't very technologically advanced, as is to be expected...).

There is a total of 14 room types (6 base shapes extended to 14 through rotations).

Upon entering a room, depending on the type of the room and Indy's entrance point (TOP,LEFT, or RIGHT) he will either exit the room through a specific exit point, suffer a lethal collision or lose momentum and get stuck:
Indy is perpetually drawn downwards: he cannot leave a room through the top.

At the start of the game, you are given the map of the tunnel in the form of a rectangular grid of rooms. Each room is represented by its type.

For this first mission, you will familiarize yourself with the tunnel system, the rooms have all been arranged in such a way that Indy will have a safe continuous route between his starting point (top of the temple) and the exit area (bottom of the temple). 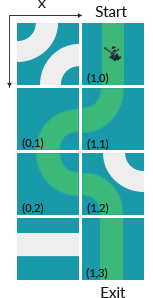 The solution can be pretty short when converting the given information into a lookup table like this:

Using this table, we only look up the direction and translate it into an actual movement decision: