You are working as a computer scientist in a laboratory seeking to sequence the genome. A DNA sequence is represented by a character string (of A, C, T and G) such as GATTACA. The problem is that biologists are only able to extract sub-sequences of the complete sequence. Your role is to combine these partial sub-sequences to recover the original sequence.

In this exercise you are asked to calculate the length of the shortest sequence that contains all the sub-sequences of the input data.

You are given N sub-sequences and you must return the length of the shortest sequence that contains all the sub-sequences. There may be several sequences of the same minimum length and which fit the requirement. We are not asking you to list these, but only to return their length.

For example, you have three sub-sequences AGATTA, GATTACA, and TACAGA. The sequence AGATTACAGA is the shortest sequence that contains all the sub-sequences.

Note that in this example, there are other sequences which contain all of the sub-sequences such as TACAGATTACAGATTA.. However, we prefer the former because it is shorter (10 characters instead of 16). 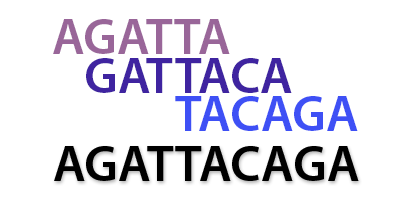 Line 1: The number N of sub-sequences

Output
The length of the shortest sequence containing all the sub-sequences.
Constraints
0 < N < 6

I had a hard time finding a solution for this problem, since I wanted to generalize it and walked from a naive approach to a suffix-tree approach. I then started googling for substring problems and eventually found that our problem is known as Shortest common supersequence problem. This problem was proofed to be NP-complete and even dynamic programming solutions still remain exponentially [1]. The trick here is the rather small constraint of \(0<N<6\). Using it, it allows us to brute-force a solution by permuting all possible orders and find the smallest matching solution. We start by implementing a function to permute an array:

For the AGATTACAGA example this gives the following permutations:

When we take the first element of the first row and try to find the first offset to match the second element, we see easily it's one. When we append the remaining characters CA to the first string and continue with third element, we see that the matching pattern is TACA with an offset of 5 and the not matching characters GA that need to be appended. We need to take care of one special case, where the string from the list is already contained in the first string, like GAT in AGATTA. Implementing the routine is then not that hard anymore:

[1] T. Jiang and M. Li On the Approximation of Shortest Common Supersequences and Longest Common Subsequences (1995)